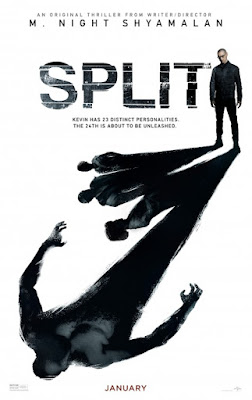 SPLIT': Four Stars (Out of Five)

M. Night Shyamalan's new horror flick, about a man with DID (dissociative identity disorder) who kidnaps three young women and terrorizes them. Shyamalan wrote and directed the movie (on a budget of just $10 million) and it stars James McAvoy, Anya Taylor-Joy (who also co-starred in 'THE WITCH' and 'MORGAN'), Betty Buckley, Haley Lu Richardson and Jessica Sula. The film has received mostly positive reviews from critics, and it's been a huge hit at the Box Office. I enjoyed it as well.

Three teenage girls are kidnapped, in broad daylight, while leaving a birthday party. Their captor is a man named Kevin (McAvoy), who also has 23 different personalities. Kevin locks the girls in a room, beneath a zoo, and continues to terrorize them; while demonstrating several different personalities. At the same time a psychologist, named Dr. Karen Fletcher (Buckley), tries to help Kevin. The doctor learns that Kevin is more than just a danger to himself, while the girls desperately try to escape him.

Shyamalan used to be one of my favorite directors. I haven't been too impressed with his recent films, like many others, but this is definitely a well made movie. McAvoy is great in the lead, and I'm sure he had a lot of fun with the role. The film is both suspenseful and involving. There's also a great twist at the end, especially for fans of Shyamalan, and I can't wait to see what the filmmaker does next. It's not quite as good as his classic earlier work, but it is definitely an effectively well made thriller.
at 6:27 PM
Labels: Anya Taylor-Joy, James McAvoy, M. Night Shyamalan, Reviews, Split, Universal Pictures