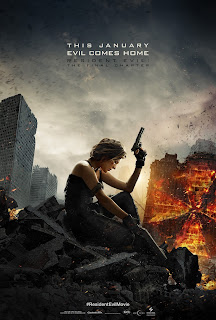 'RESIDENT EVIL: THE FINAL CHAPTER': Three and a Half Stars (Out of Five)

The sixth film in the zombie flick franchise (which began in 2002), based on the popular Capcom horror video game series. Paul W.S. Anderson wrote and directed the movie; as he did the first, fourth and fifth installments. It once again stars Milla Jovovich as Alice (reprising the role for the sixth time); the badass heroine survivor, that's constantly trying to save the remaining world from a zombie apocalypse. In this installment she must make a final stand, with the other remaining human survivors, against the evil Umbrella Corporation; and the zombie outbreak that it created. The movie also costars Ali Larter, Iain Glen and Shawn Roberts (all reprising their roles from the other films). It's gotten mediocre reviews from critics, and it's also performed as it was expected to at the Box Office (so far). I enjoyed it about as much as the other films in the series.

The film begins three weeks after the end of the last chapter; when Alice (Jovovich), and other survivors, were betrayed by Albert Wesker (Roberts). Alice is forced to return to Racoon City (where the series began) and join with the other survivors, once more, in a final fight against the Umbrella Corporation. We also learn that the evil company released the T-virus on purpose, in order to 'cleanse the world of the mediocre and poor' (much like Trump, and other Republicans, would like to do now). The survivors must also (of course) once again battle a vicious army of zombies.

The movie is almost nonstop action; which is entertaining for a while, but for me it can get a little boring. There's very little actual story in it, and absolutely no character development, but Jovovich does give an awesome action heroin performance once again. In my opinion this film is no better, and no worse, than the others; but it definitely has been done many times before (within this same franchise). The first film was at least a lot more interesting, and gruesome, and somewhat fresh. This installment basically does what you'd expect any sixth (and final) film in a long running franchise to do, and it does it moderately well.
at 6:19 PM
Labels: Ali Larter, Milla Jovovich, News, Resident Evil: The Final Chapter, Reviews, Sony Pictures