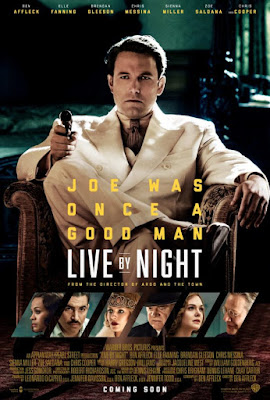 'LIVE BY NIGHT': Three and a Half Stars (Out of Five)

The new crime drama from writer/co-producer/director Ben Affleck (who also stars in the movie). It's based on the 2012 novel (of the same name) by Dennis Lehane; who also wrote 'GONE BABY GONE' (which Affleck also directed the film adaptation of). Leonardo DiCaprio, who was originally supposed to star in the movie, also served as a co-producer on the film. The mob flick costars Elle Fanning, Sienna Miller, Zoe Saldana, Chris Messina, Brendan Gleeson and Chris Cooper. It tells the story of the son of a respected Boston police captain, and a World War I veteran, who becomes a notorious gangster (during the 1920s and 1930s). The film was originally expected to be another possible awards contender, for Affleck, but it hasn't received many overly positive reviews from critics. Despite being a fan of Affleck, as a director and an actor, I wasn't that impressed either.

The story begins in Boston, during the 1920s. Joe Coughlin (Affleck) is a World War I veteran, who's now an Irish criminal. He's also the son of the Boston police captain (Gleeson), and having an affair with the mistress (Miller) of a powerful Irish gangster, named Albert White (Robert Glenister). Joe is nearly killed by White, and then arrested for the death of three police officers; during a crime he committed with his partner Dion Bartolo (Messina). After serving three years in prison, he goes back into a life of crime, in Florida. He continues to get himself into more trouble there, while also becoming a successful gangster himself.

I've really enjoyed all three of Affleck's other directorial efforts ('THE TOWN', 'GONE BABY GONE' and 'ARGO'), so I definitely had high hopes for this; sadly it didn't live up to my expectations (and the reviews, and Box Office, have absolutely no effect on my opinion). The movie is beautifully shot, and Affleck did another excellent job directing the film; but his acting performance is definitely not one of his best. The other actors all give decent performances in the movie though, and there's some pretty cool actions scenes in it. The pacing is a little slow though,
at 10:21 AM
Labels: Ben Affleck, Chris Cooper, Elle Fanning, Live By Night, Reviews, Warner Brothers, Zoe Saldana