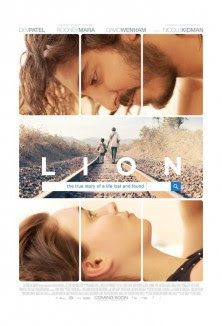 Another upcoming Academy Awards hopeful is this drama, directed by debut feature filmmaker Garth Davis. It tells the story of a 5-year-old Indian boy, that falls asleep on a train car and is taken 1600 kilometers from where he lives. He is later adopted, by an Australian couple, and 25 years later he decides to track down his birth family, by using Google Earth. The film is based on the 2014 non-fiction book 'A Long Way Home' (by Saroo Brierley), and it was scripted by Luke Davies. It stars Dev Patel, Sunny Pawar, Rooney Mara, Nicole Kidman and David Wenham. The film has performed well at the Box Office, and with critics, and it's also been nominated for multiple respected awards (and it's also won some). I loved it.

Saroo (Pawar) goes with his older brother, Guddu (Abhisek Bharate), to work at a train station one night. When Saroo is then too sleepy to help, he waits at a bench, for Guddu, while his brother goes to work. When Guddu doesn't return though, Saroo goes looking for him. He then falls asleep on a train, while looking for his brother, and the train takes off with him sleeping inside it. It takes Saroo 1600 kilometers away, to Calcutta. Having no idea how to get back home, or how to tell anyone where he's from, the boy is forced to live on the streets. He's later put in an orphanage, and then adopted by an Australian couple (Kidman and Wenham). 25 years later, Saroo (now played by Patel) decides to track down his biological family, and finally return home. He uses Google Earth to help him do this, although at first it seems impossible.

The movie is very involving, and quite fascinating; I was hooked on it from the very start. The characters are all lovable, and the performances are all topnotch (especially Patel and Kidman). It's also a very emotionally moving film, and in some ways it's quite inspiring. I look forward to seeing what Davis directs next; this movie is definitely one of the year's best, and it deserves all of it's awards recognition.
at 10:40 AM
Labels: Dev Patel, Lion, Nicole Kidman, Reviews, Rooney Mara, The Weinstein Company