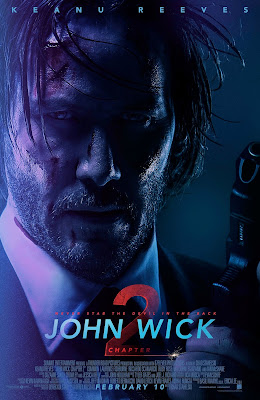 Sequel to the 2014 action hit 'JOHN WICK', starring Keanu Reeves (once again) as the title character. The story revolves around Wick, a retired hitman, who's once again forced to go back into his former world of violence, when a bounty is placed on his head. The movie is also once again directed by Chad Stahelski, and it's once again written by Derek Kolstad as well. Ian McShane, John Leguizamo, Lance Reddick and Bridget Moynahan (briefly) also all reprise their roles from the first film; while Riccardo Scamarcio, Ruby Rose, Common and Laurence Fishburne (Reeves' former 'MATRIX' trilogy costar) also play supporting roles in this sequel. It's received nearly unanimous rave reviews from critics, and fans alike, and it's also a hit at the Box Office too. I also really enjoyed it (just like I did the first film).

The movie begins right where the first one left off, with John Wick (Reeves) tracking down his stolen car, at a chop shop, and getting revenge on those that stole it. He's then approached, at his home, by a crime lord named Santino D'Antonio (Scamarcio). The crime boss wants him to assassinate his sister (Claudia Gerini), so he can take her place at a council for crime lords. Wick initially rejects the assignment, but he soon learns that the bloody crime world, which he so desperately wants to leave, won't let him retire.

The film is once again nonstop action, and very bloody (and excessively violent) action as well. If you're a fan of the first movie, I'm sure you'll love it; especially if you're a fan of Keanu Reeves. I'm a big fan of Reeves as a person, and I like him as an actor, in certain roles too; but he sucks in a lot of roles as well. John Wick is definitely one of his best parts. The character is becoming a classic badass action hero, and the series is now becoming a classic action movie franchise. I can't wait to see what the third movie brings!
at 8:23 PM
Labels: John Wick: Chapter Two, Keanu Reeves, Reviews, Ruby Rose, Summit Entertainment