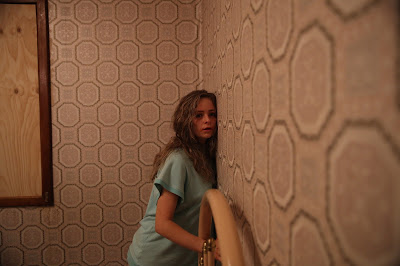 Gunpowder & Sky Distribution recently send us information the acquired the thriller "Hounds of Love. The film recently had its North American premiere at the 2017 SXSW Film Festival. Its s directed by Ben Young and stars Emma Booth, Stephen Curry, and Ashleigh Cummings.

"Hounds of Love" hits theaters on May 12th.

Gunpowder & Sky Distribution announced today that HOUNDS OF LOVE, the bold debut film from writer/director Ben Young, is set to open in theaters May 12, 2017, following its North American Premiere at the 2017 SXSW Film Festival.

In suburban Perth during the mid 1980s, people are unaware that women are disappearing at the hands of serial killer couple John and Evelyn White. After an innocent lapse in judgment, Vicki Maloney is randomly abducted by the disturbed couple. With her murder imminent, Vicki realizes she must find a way to drive a wedge between Evelyn and John if she is to survive. Hounds of Love is an exercise in expertly-crafted tension, offering a bold, challenging debut from writer/director Ben Young.

"I was drawn to the idea of Hounds of Love after reading a true crime book about female serial killers," said filmmaker Ben Young. "It triggered a strong memory of fear from my childhood that was instilled by my parents as a result of crimes committed by a serial killer couple."

"Ben has created a relentlessly tense debut film and made his mark as a writer-director to watch," said G&S's Hake Hanly. "Our whole team was floored by the strength of Ben's vision and his unique character-driven twist on the serial killer film. The cast delivers brave performances that resonate long after the film has ended."