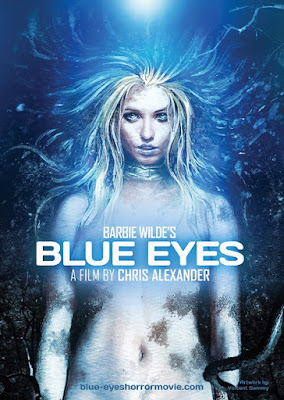 They will be starting a Kickstarter for the film to be announced later.

For more information on this film, you can visit the film's official Facebook page at: https://www.facebook.com/BlueEyesHorrorMovie

Blue Eyes will be directed by Chris Alexander (Blood for Irina, Queen of Blood, Female Werewolf and the upcoming Blood Dynasty), with a script written by Alexander and Barbie Wilde, actress (Hellbound: Hellraiser II, Death Wish 3) and author (The Venus Complex, Voices of the Damned). The script is based on an original story by Wilde.

Official Synopsis: Gazza Hunt is a man living on the edge, a man whose life has been battered down by bum luck and bad decisions and who has simply given up. Homeless, hopeless and wracked by addiction, Gazza's desperate existence is interrupted one night when, wandering in the woods, he follows a glowing blue light to a freshly dug hole in the earth where he finds an ethereal, nude sleeping beauty, perfect in every way. But, as Gazza soon learns, this woman isn't asleep. She's dead. And yet somehow Gazza is still uncontrollably drawn to her...this blue girl...with those blue eyes...
at 3:29 PM
Labels: Blue Eyes, Chris Alexander, Indie News