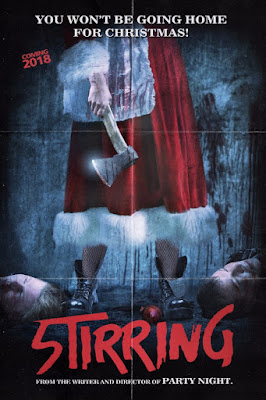 Fright Meter Films recently send us over information for their Kickstarter Campaign for their upcoming film "Stirring". They are looking to raise $13,500 by March 10th, 2016 or the film will not happen.

Horror icon and Scream Queen Brinke Stevens is set to star in the film alongside Helene Udy who appeared in the classic 1981 slasher My Bloody Valentine and up and coming indie horror actress Kaylee Williams (Model Hunger, The Lashman, Porkchop 3D).

To contribute to this campaign, you can goto: https://www.kickstarter.com/projects/1488629688/stirring

Troy Escamilla, in collaboration with Fright Meter Films, is set to produce his second feature film and bring true holiday terror to the screen in Fall 2018. Titled Stirring and penned by Escamilla, it was inspired by Escamilla's favorite horror film, 1974's Black Christmas and will focus a group of students attending a Christmas party at a sorority house with a sinister past who are stalked by a bloodthirsty killer. Horror icon and Scream Queen Brinke Stevens is set to star in the film alongside Helene Udy who appeared in the classic 1981 slasher My Bloody Valentine and up and coming indie horror actress Kaylee Williams (Model Hunger, The Lashman, Porkchop 3D).

Escamilla has a goal of raising $13,500 by March 10th, 2016 with the Stirring campaign. There are a plethora of great rewards available for backers, including the opportunity to be an extra in the film! Troy Escamilla knows and respects the horror genre. He founded the Fright Meter Awards, which have grown in respect and popularity over the last few years with global backers that make up the over 50 member international Award Committee, including bloggers, writers, directors, producers, actors and fans in the horror genre.

Fright Meter Films first feature, Party Night, was filmed this past June after being successfully funded on Kickstarter. Also written and directed by Escamilla, it wrapped post production last month and has received very positive early reviews from sites such as Dread Central, iHorror, The Horror Sydicate, and PopHorror. Escamilla plans to hit the festival circuit in 2017 with Party Night. He promises Stirring will not disappoint: “Fans of holiday themed horror will enjoy the hell out of it; it’s bigger, bloodier and bolder than Party Night! Fans will recognize winks to Black Christmas, Silent Night, Deadly Night and To All a Goodnight, but will also appreciate its own unique style and take on the Christmas themed slasher,”

JOIN THE PARTY & support the film at: https://www.kickstarter.com/projects/1488629688/stirring

Remember: Kickstarter Campaigns are all or nothing.

Pledge now. There are great rewards for backers! Big or small, all pledges are welcomed and all count! Every amount helps us hit the front Kickstarter page!
Remember: the money is not contributed now—It will not be paid until the campaign ends and only if the project meets its funding goal!1
Visit the Kickstarter page even if you can’t pledge. All views help boost our notice!
If you know someone who could contribute and is a fan of the arts and/or horror, tell them about the film and ask them to pledge at Kickstarter.
Let others know—share the Kickstarter campaign page on your social media accounts.
at 3:33 PM
Labels: Brinke Stevens, Fright Meter Films, Helen Udy, Indie News, Kaylee Williams, Stirring