Action Packed "Three" Blasts Its Way to Your Home 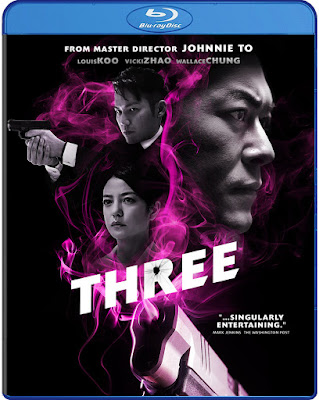 Tensions mounts and bullets fly in master filmmaker Johnnie To’s (Drug War, Exiled, Election) THREE, his latest showdown between cops, robbers and everyone else caught in the crossfire. When a police sting goes bad, a cornered criminal (Wallace Chung, Drug War) makes a desperate choice: he shoots himself, forcing the officers to cease fire and rush him to the hospital. Once there, he refuses treatment, waiting for his cohorts to break him out. Caught between an obsessed cop (Louis Koo, Triad Election) and the dedicated surgeon assigned to save his life (Zhao Wei, Red Cliff), the hospital is now a battleground of deception, double-crosses and a coming onslaught of violence. The action-packed THREE explodes onto digital March 7 and on Blu-ray™ and DVD April 4 from Well Go USA Entertainment. Bonus materials offer fans two behind-the-scenes featurettes: a look at “Master Director Johnnie To” and an exploration of the “Three Complex Characters” featured in the film.

Synopsis:
When three disparate souls—a doctor desperate to redeem her reputation (Vicki Zhao), a policeman who will go to any length to seek out justice (Louis Koo), and a criminal with a gunshot wound to the head (Wallace Chung)—are thrown together in the hustle and bustle of an emergency room, a hospital descends from a pristine sanctuary to an explosive battleground.