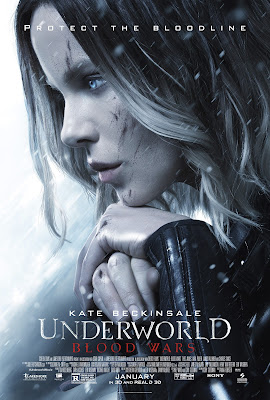 'UNDERWORLD: BLOOD WARS': Three and a Half Stars (Out of Five)

The fifth installment in the popular 'vampires vs. werewolves' horror franchise. It once again stars Kate Beckinsale, as the badass action heroine Selene. In this chapter she's trying to prevent the vampire army, and the lycans, from getting ahold of her daughter; and using both their blood to make themselves a more powerful hybrid. The film also costars Theo James, Lara Pulver, Tobias Menzies and Charles Dance. It was directed by first time feature filmmaker Anna Foerster; and it was scripted by Cory Goodman (who also co-wrote the action/horror flicks 'THE LAST WITCH HUNTER' and'PRIEST') and Kyle Ward (who also co-wrote 'MACHETTE KILLS'). The movie disappointed at the Box Office, and it got mostly negative reviews from critics (but fans seem to mostly like it). I also was disappointed with the film.

Both the vampires, and the lycans, are hunting Selene (Beckinsale). They both want Selene to lead her to her daughter; so they can use both the mother and daughter's blood to make themselves much more powerful. Selene doesn't know where her daughter is though; as she promised her she'd leave her alone. She reteams with the vampire David (James) to fight both armies.

I was a fan of the original 'UNDERWORLD' movie (and it's first couple of sequels), and I especially like Beckinsale in the lead, but this installment did not interest me at all. The action scenes are all still good in it though, and the gore is cool (and Beckinsale is as awesome as ever). I don't find the mythology involving at all anymore though (and I don't really remember the other films that well). Fans of the series will probably still enjoy it though; and Pulver is absolutely awesome (and breathtakingly gorgeous) as the main villain in it. She almost made the movie for me!
at 6:38 PM
Labels: Kate Beckinsale, Reviews, Screen Gems, Sony Pictures, Theo James, Underworld: Blood Wars