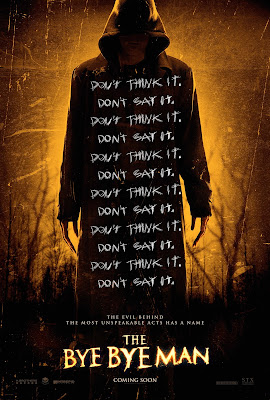 'THE BYE BYE MAN': Three Stars (Out of Five)

A horror flick about a supernatural entity that can possess anyone that learns it's name, which terrorizes three college students. It was directed by Stacy Title, and written by Jonathan Penner (of TV's 'SURVIVOR' fame). The script is based on a chapter of the 2005 book 'The President's Vampire', titled 'The Bridge to Body Island' (by Robert Damon Schneck). The film stars Douglas Smith, Cressida Bonas, Lucien Laviscount, Jenna Kanell, Michael Trucco, Carrie-Ann Moss, Leigh Whannell, Erica Tremblay, Cleo King, Faye Dunaway and Doug Jones (as The Bye Bye Man). It's received mostly negative reviews from critics, and fans alike, but it's done really well at the Box Office (so far). I thought it was OK.

Three college students (Smith, Bonas and Laviscount) move into an old house, near campus. Once there, they learn about a supernatural entity called The Bye Bye Man (Jones). They also discover that the Bye Bye Man can possess anyone who says or thinks it's name (and make them do horrible things). In order to try and stop the creature, they investigate it's origins. While doing so, they desperately try to stop others from learning about it. They also frantically try not to kill each other, in the process either.

The movie is a great concept for a horror flick, and The Bye Bye Man is definitely a frighteningly memorable slasher film villain. I'd like to see a sequel, or maybe more, and hopefully the potential franchise keeps getting better. Penner's script isn't bad though (he also plays a small part in the film), and Title's direction is decent as well. I also can't believe the producers got such an awesome cast for this (Whannell, Moss, Dunaway, Jones!). I'd still recommend seeing it, if you're a fan of horror movies.
at 4:36 PM
Labels: Reviews, STX Entertainment, The Bye Bye Man