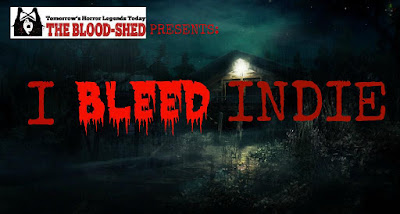 The Blood Shed recently sent us over information of the launch of their new venture "I Bleed Indie". The venture is the first VOD website that caters and promoting American and international horror films. The website recently launched with over 100 feature films as well with some short film.

For more information on this site, you can goto: www.IBleedIndie.com.

Johnny Macabre and TheBloodShed have announced the launch of www.IBleedIndie.com - a first of its kind VOD website dedicated to promoting American indie and international horror films.

There are many indie film makers who don't want to deal with sales agents and distributors. They choose instead to self distribute. And this choice says nothing of the quality of the films themselves as there are some amazing horror movies released in this manner. But, while it leaves the film makers with full control of their movie, it also severely limits what they can do with it. One area it limits is their VOD options. A self distributed film's only real options before now have been creator-operated Youtube or Vimeo channels.

This is where IBleedIndie.com comes in. The site offers a PPV platform for indie horror films, all the while allowing the film makers to keep all rights to their film in non-exclusive agreements where they receive 90% of all revenue from rentals.

We launched with over 100 feature films with more on the way and a good handful of short films as well. Features on our site rent for 72 hour periods for $3, shorts for $1. Select films are also available for digital download.

We have films from literally dozens of amazing indie horror film makers and have even gotten on board several indie-friendly distributors like Wild Eye Releasing, Brink Vision, Self Destruct, Cinema Epoch, SGL, and Artsploitation. Titles include: Japan's HORROR STORIES, AMITYVILLE: THE VANISHING POINT, the Romanian shocker BE MY CAT: A FILM FOR ANNE, the Slovenian KILLBILLIES and the American ALL HELL BREAK LOOSE.

You can keep up to date by following us on Facebook at https://www.facebook.com/IBleedIndieVOD/ or going to the website at www.ibleedindie.com
at 10:27 AM
Labels: I Bleed Indie, The Blood Shed, VOD News