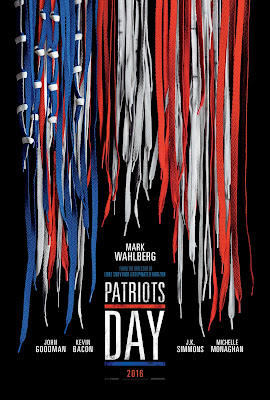 The new dramatic thriller, based on the 2013 Boston Marathon bombing; and the efforts that law enforcement went through to catch the terrorists responsible. The movie was directed by Peter Berg, and it stars Mark Wahlberg; making it their third collaboration together (following 2013's 'LONE SURVIVOR', and 'DEEPWATER HORIZON' from earlier this year). Berg also co-wrote the screenplay; with Matt Cook, Paul Tamasy and Eric Johnson. It's based on the book 'Boston Strong', by Casey Sherman and Dave Wedge. The film also costars Kevin Bacon, John Goodman, J.K. Simmons, Alex Wolff, Themo Melikidze and Michelle Monaghan. It's received mostly positive reviews from critics, but it's also disappointed at the Box Office (so far). I found it to be a mostly well made, and effective action-thriller; but it's also exploitative, and somewhat corny (at times).

The movie depicts the events of the Boston Marathon bombing, as well as the terrorist manhunt that followed (involving the police and the FBI). It revolves around a fictional Boston Police Department sergeant, named Tommy Saunders (Wahlberg), as well as multiple other law enforcement officers. It also briefly tells the story of several other (real life) people, that were greatly effected by that tragic day. The film spends the most time following the two terrorists, Dzhokhar (Wolff) and Tamerlan (Melikidze) Tsarnaev.

As an action movie, and suspenseful thriller, I think the film was really well made. Berg is a good action movie director; and Wahlberg, and most of the rest of the lead cast, always deliver in films like this. The movie does seem exploitative at times though, especially when it concludes with an emotionally forced tribute (to the real survivors involved in the terrorist attack). It just seems like the filmmakers are trying to justify the action movie that proceeded it; and I think their forced justification makes them look even worse. The film is also filled with corny caricatures (at times), and exaggerated sentimentality (at other times). It is an otherwise well made, and entertaining, action flick though.
at 7:11 PM
Labels: CBS Films, J.K. Simmons, John Goodman, Lionsgate, Mark Wahlberg, Patriots Day, Peter Berg, Reviews