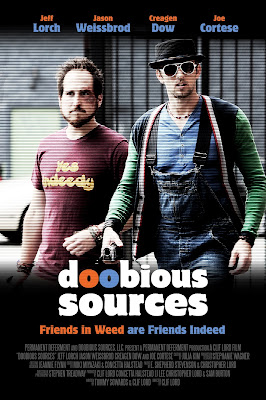 Doobious Sources stars Jeff Lorch and Jason Weissbrod as renegade investigative journalists in a new satire on the modern spread of fake news as entertainment. Half art film, half stoner comedy, Doobious Sources is constructed from footage shot by the two perpetually high protagonists whose mutual distrust and paranoia has compelled them to record each other constantly so neither can turn on the other.

Zorn and The Reg are amoral, weed-loving, freelance video journalists with no regard for journalistic ethics. They become unwitting dupes of a local reporter who hires them to work on an undercover report about corruption at City Hall. Already targeted for revenge by a mogul they slandered in a sordid sex scandal, the perpetually blazed best friends find themselves dragged into an escalating web of illegal activities that requires their full arsenal of lechery and dirty tricks if they want to make it out alive.