"Manchester by the Sea" Review by Tim Hellman 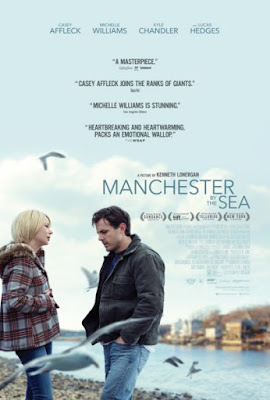 'MANCHESTER BY THE SEA': Four and a Half Stars (Out of Five)

Another upcoming Oscar hopeful is this critical darling, from writer/director Kenneth Lonergan. The story deals with a depressed janitor; who's unexpectedly forced to take care of his teenage nephew, when his brother dies. The movie stars Casey Affleck, Lucas Hedges, Michelle Williams, Kyle Chandler and Gretchen Mol. Matt Damon, who starred in Lonergan's last film 'MARGARET', served as a producer on the movie (he's also good friends with Casey Affleck). The film is expected to garner many Academy Award nominations (and it could possibly earn Affleck his first Oscar); it was also named one of the ten best movies of the year, by the American Film Institute. I think it's definitely a film that has to be respected!

Lee Chandler (Affleck) is a lonely janitor, with an extremely depressing past, who works (and lives) in Quincy, Massachusetts. His brother, Joe (Chandler), has been terminally ill for some time, when he suffers a heart attack and dies. Lee is shocked to learn that Joe requested he become the legal guardian of Joe's son, Patrick (Hedges). Lee is not ready for this kind of responsibility again, especially after his tragic past (which we learn about through many flashbacks). He reluctantly stays with Patrick, at Joe's house (in Manchester-by-the-Sea), while he attempts to figure out what he should do next.

The film is about as depressing as they get; but it does have just a glimmer of hope, and inspiration. This is thanks largely to an outstanding cast, especially Affleck (Ben should be jealous), and awesome directing (and writing) from Lonergan. Damon also did an awesome job producing (that's a joke). It's a hard movie to sit through, and it's pretty light on laughs, but it does manage to find some light in all of it's darkness. Which is always an impressive thing for a film to do. It's also filled with rich character development; and it's another movie that actually feels like you're watching real people, doing real things (which is always an impressive thing for a film to accomplish as well). It deserves all of it's rave reviews.
at 7:07 PM
Labels: Amazon Studios, Casey Affleck, Manchester by the Sea, Reviews, Roadside Attractions