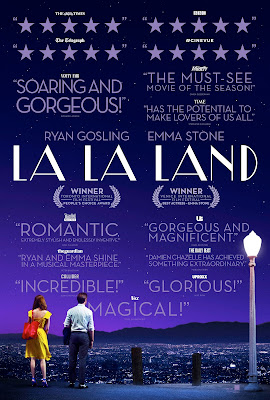 The critically acclaimed romantic comedy-drama musical, from writer/director Damien Chazelle; who also performed both duties on 2014's 'WHIPLASH' (my favorite movie of that year). The film tells the story a jazz pianist, that falls in love with a struggling actress; while they both try to get by in Los Angeles. The movie stars Ryan Gosling and Emma Stone, in their third film together playing lovers (after 'CRAZY, STUPID, LOVE' and 'GANGSTER SQUAD'), and it costars John Legend, Rosemarie DeWitt and J.K. Simmons in a cameo appearance (he won an Oscar for his performance in 'WHIPLASH'). On top of being almost unanimously praised by critics, it was also named one of the ten best movies of the year by the American Film Institute, and it's expected to likely win Best Picture at next year's Academy Awards. I really enjoyed it.

Mia (Stone) and Sebastian (Gosling) are both struggling artists, trying to make a living (while doing what they really love) in Los Angeles. Sebastian is a jazz musician, who attempts to pay the bills by playing bars and parties, while Mia is an aspiring actress, who gets by serving coffee to actors on the set of a movie studio. The two meet, and don't immediately take a liking to each other, but eventually mutual attraction appears to grow between them. They then take turns supporting each other, in their different passions, while attempting to maintain a relationship.

Chazelle is a drummer, who wrote 'LA LA LAND' back in 2010 (when he was still just an aspiring filmmaker). All three of his movies, including 2009's 'GUY AND MADELINE ON A PARK BENCH' (which is also a musical), focus heavily on jazz music. I think this is a very passionate subject for him, as is film, and it's because of this strong (heartfelt) passion, that his films become such great masterpieces. This is an old fashioned (soon to be classic) musical; I saw it with my parents and they loved it. Because this genre of film is so rare, I think it will win Best Picture (it's definitely one of my favorites of the year). Gosling and Stone are both fantastic in it, and they have beautiful chemistry together (once again); the romance between their characters is both very touching and believable as well. It's a great film!
at 10:41 AM
Labels: Emma Stone, J.K. Simmons, La La Land, Reviews, Ryan Gosling, Summit Entertainment