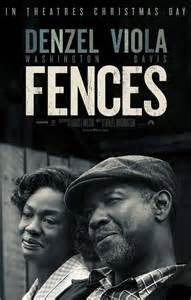 'FENCES': Four and a Half Stars (Out of Five)

The critically acclaimed drama, based on the Pulitzer Prize winning play (of the same name) by August Wilson; who also wrote the screenplay (before his death in 2005). Denzel Washington directed the movie; which he also stars in, with actress Viola Davis (Washington and Davis both won Tony awards, for playing the same roles in the 2010 Broadway revival). The film also costars Stephen McKinley Henderson, Jovan Adepo, Russell Hornsby and Mykelti Williamson. It was named one of the ten best movies of the year, by the American Film Institute, and it's expected to garner multiple Academy Award nominations. I think it's a superbly acted film, and it's equally as impressively directed; Washington once again proves why he's one of the most talented people in film today.

The story is set in Pittsburgh, in the 1950s. Troy Maxson (Washington) is a waste collector, who's also married with two sons; one from a previous marriage (Hornsby), who's now 34-years-old. Maxson struggle with the race relations of that time, while he also has even more trouble getting along with his family. The whole time his loving wife, Rose (Davis), stays loyally by his side.

The film is surprisingly faithful to the play (I've heard); so much so that it often feels like you're watching an actual play (more than a movie). This makes it very wordy, and quite long (and very slow-paced), but it's worth staying patient for. The performances are amazing, and so is the powerful character development. I was kind of shocked to learn how unlikable Washington's character is, more so as the movie goes on even, and he definitely didn't grow on me. I rooted for his abused family instead, and I did not wish to see Washington's antihero succeed. He is amazing in his role though, and so is Davis, and the film is quite fascinating to watch as well (if you have the patience to sit through it).
at 7:10 PM
Labels: Denzel Washington, Fences, Paramount Pictures, Reviews, Viola Davis