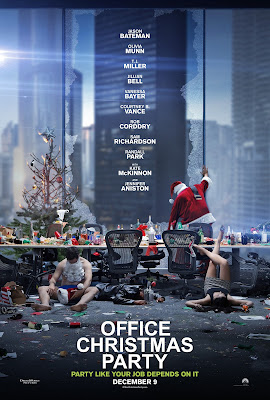 A Christmas comedy film about a group of desperate employees, that are trying to save their company's branch (from being closed) by throwing an awesome office Christmas party (to attract a potential big client). It was directed by Will Speck and Josh Gordon; and it was written by Justin Malen, Laura Solon, Dan Mazer, Jon Lucas, Scott Moore and Timothy Dowling. The film stars Jason Bateman, T.J. Miller, Olivia Munn, Jennifer Aniston, Courtney B. Vance, Kate McKinnan, Jillian Bell, Rob Corddry, Vanessa Bayer, Karan Soni and Randall Park (Bateman and Aniston also starred in Speck and Gordon's last movie 'THE SWITCH'). It received mostly negative reviews from critics, but it has done well at the Box Office (so far). I enjoyed it.

Clay Vanstone (Miller) is the branch manager of Zenotek's Chicago branch. His sister Carol (Aniston) is the company's intermediate CEO. She also resents Clay, because Clay was always their father's favorite (who recently passed away). Carol is threatening to make huge cuts, to the business, and possibly shut down Clay's branch; unless they can meet her new quarterly quota. One way, they could possibly do this, is by partnering with Walter Davis (Vance). Clay thinks the best way to impress him is to throw an awesome office Christmas party; which he, and his technical officers (Bateman and Munn), invite him to.

The movie is pretty funny (in places) and the cast is all awesome in it (especially Miller). I wouldn't call it a Christmas classic though; only time will tell I guess, but I seriously doubt it. It is well made though, it has a great premise and it's very humorous (from time to time). None of the jokes are that bad either (and it's never painful to sit though), that's a big positive in my opinion.
at 8:45 PM
Labels: Jason Bateman, Office Christmas Party, Olivia Munn, Paramount Pictures, T.J. Miller