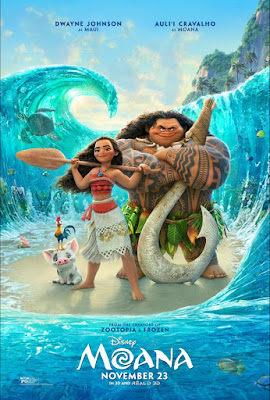 Disney's 56th animated feature is this computer-animated fantasy film, starring the voice talent of Dwayne 'The Rock' Johnson. The film tells the story of an ancient Polynesian tribe, that's suffering the damage of a horrible curse, when the Chieftain's teenage daughter sets out to end it. She seeks the help of a demigod named Maui, who also caused the curse. The film also features the voices of Auli'i Cravalho (a debut actress, who was cast at the age of just 14), Alan Tudyk, Jemaine Clement, Temuera Morrison, Nicole Scherzinger and Rachel House. It was directed by Ron Clements, John Musker, Don Hall and Chris Williams (Clements and Musker previously co-directed other Disney animated hits, like 'THE LITTLE MERMAID', 'ALADDIN', 'HERCULES' and 'THE PRINCESS AND THE FROG', and Hall and Williams previously co-directed Disney's 'BIG HERO 6'). It was written by Jared Bush, Pamela Ribon and Aaron and Jordan Kandell; along with Clements, Musker, Hall and Williams. The film has been a huge hit at the Box Office, and it's also done impressively well with critics. I enjoyed it.

Moana (Johnson) is the daughter of the chief (Morrison) of a Polynesian tribe, on an island of fisherman. When the fish vanish, due to a curse caused by a demigod named Maui (Johnson), Moana sets out to stop it. She finds the arrogant demigod who caused the curse, and demands he help her. Maui reluctantly agrees and the two go an adventuresome journey together; with the mystical help of the ocean itself. The story is loosely based on Polynesian mythology.

The film is beautifully animated and quite colorful. The characters are all likable, and there's even some touching emotional depth (especially towards the end of the movie). Johnson is perfectly cast, and Cravalho does a pretty impressive job as well (for such a young debut actress). There's even a nice message about respecting all life in there, including animals (and not eating them). It's not as good as classic Disney animation, but it is a very well made and entertaining film.
at 9:21 PM
Labels: Dwayne Johnson, Moana, Reviews, Walt Disney Pictures