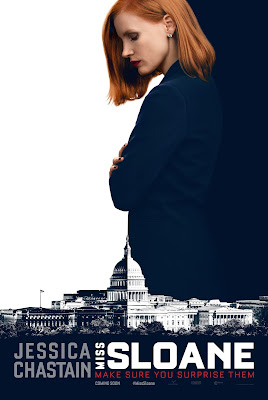 'MISS SLOANE': Four and a Half Stars (Out of Five)

A political thriller starring Jessica Chastain, as an obsessively dedicated lobbyist who dares to take on the gun-lobby. The film was directed by seasoned filmmaker John Madden (who also directed Chastain in the 2010 thriller 'THE DEBT'), and it was written by first time screenwriter Jonathan Perera. It costars Mark Strong, Gugu Mbatha-Raw, Michael Stuhlbarg, Alison Pill, Sam Waterston, John Lithgow and Jake Lacy. The movie's received mostly positive reviews from critics, and Chastain has received a Best Actress Golden Globe nomination (Drama) for her performance. I was really moved by the film!

Elizabeth Sloane (Chastain) is one of the most successful, and disturbingly obsessive, lobbyists in Washington, D.C.. Her tactics are known for being questionably immoral, and sometimes illegal, as she'll do almost anything to win. Sloane catches everyone by surprise, when she decides to challenge the even more corrupt gun-lobby. Her extreme dedication to winning might finally become too much for her, as well as everyone around her, in her new daring conquest.

The film is politically insightful, especially in modern times, and quite dramatically involving too. Chastain gives a very powerful performance (possibly one of the best of her career), and her character is pretty fascinating as well. The movie should be seen as quality entertainment to everyone, no matter where you stand on the political topic. In my humble opinion, it's an impressively well made film.
at 8:41 PM
Labels: EuropaCorp, Jessica Chastain, Mark Strong, Miss Sloane, Reviews