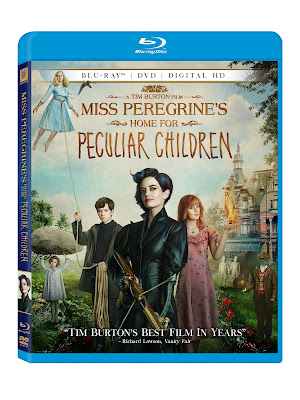 Special features on the Blu-Ray and DVD include The Peculiar Story – Join author Ransom Riggs and the cast & crew as they discuss how this best-selling series was brought to life, The Peculiars – Meet the cast in this behind-the-scenes piece, including 15 character pods, Hollows And Ex-Hollows – Explore the role of the Hollows, led by Barron (Samuel L. Jackson,) and the process of creating these ferocious creatures, Map Of Days – Miss Peregrine’s Home & Blackpool Tower, “Wish That You Were Here” – Florence + The Machine Music Video and Gallery – Never-Before-Seen Sketches by Tim Burton and Photographs.

When 16-year-old Jake unravels a mystery that spans alternate realities and times, he discovers a secret world for children with unusual powers, including levitating Emma, pyrokinetic Olive, and invisible Millard. But danger soon arises and the children must band together to protect a world as extraordinary as they are. Immerse yourself in this “big, bold, and perfectly peculiar” (Silas Lesnick, ComingSoon.net) experience.