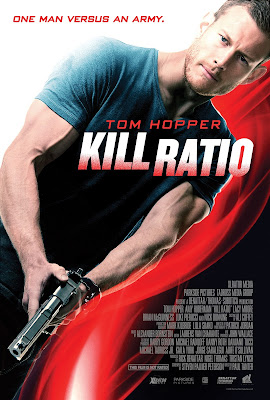 A low-budget B-action flick; about a badass American covert operative, that's trying to defend the president of a poor European country against a ruthless military takeover. The film stars Tom Hopper, as the heroic badass, and it costars Amy Huberman, Lacy Moore, Nick Dunning, Brian McGuinness and Luke Pierucci. It was directed by Paul Tanter (a veteran of the genre), and it was written by Steven Palmer Peterson (a debut screenwriter). The film reminds me of the type of bad B-action flick I grew up on (one of the less memorable ones though); so in some ways it's kind of nostalgic, but it's mostly just bad.

Hopper plays James Henderson, a highly skilled (and somewhat witty) U.S. covert operative; that's on assignment in a small European country (with an unstable democracy). The country has recently elected a new President (Moore), who promises to bring new hope to the people there. The general of the corrupt country's military, General Lazar (Dunning), wants to do away with the new democracy though; by killing the President, and anyone else that gets in his way. He didn't count on James Henderson though (of course).

The film is exactly like so many 80s action movies that I watched as a kid, the kind that used to play repeatedly on TBS (most of them starring Chuck Norris or Dolph Lundgren). Hopper is definitely charismatic in the lead, and he thinks he's pretty funny. He doesn't have what it takes to be a big star though, but he could definitely keep doing direct-to-video movies like this (and TV, which he's already doing). The director and writer should probably stick to this genre as well. The movie is mildly entertaining, but I think you have to be a pretty big fan of the the genre to even get that out of it.
at 6:26 PM
Labels: Kill Ratio, Reviews, XLrator Media