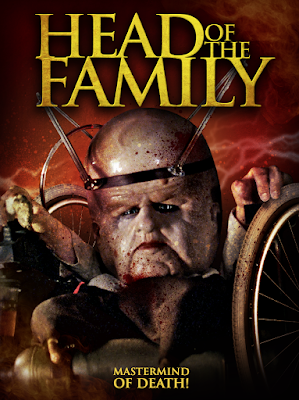 "Head of the Family" hits retail on December 20th.

Christmas has come early for fans of Full Moon Entertainment, as Charles Band's 1996 horror romp HEAD OF THE FAMILY arrives on Blu-Ray on December 20.

One of Full Moon's more unique features, HEAD OF THE FAMILY stars Blake Adams, Jacqueline Lovell, J.W. Perra, Bob Schott and Alexandria Quinn in a horror comedy about the head of the family who is literally that - a giant head on a tiny body!

Lance and Loretta are having a torrid affair behind her husband Howard's back. The problem is that Howard is brutal thug who is bound to catch the cheating pair sooner or later. To solve this problem, the lovers hatch a plan involving the Stackpoole family: a collection of misshapen freaks who waylay unsuspecting travellers and dissect them in gruesome experiments. Unfortunately, things don't go quite according to plan.
at 8:22 PM
Labels: Blu-Ray News, Charles Band, Full Moon Features, Head of the Family