"The Birth of a Nation" Review by Tim Hellman 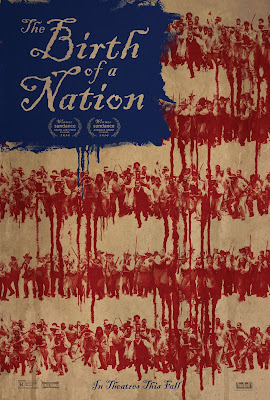 'THE BIRTH OF A NATION': Five Stars (Out of Five)

A historical drama biopic, and possible upcoming Oscar contender, based on the life of Nat Turner. Turner was a literate slave, in the early 1800s South, who led a rebellion in 1831 Southampton County, Virginia. It was written, produced and directed by Nate Parker; who also stars in the film. The movie also costars Armie Hammer, Aja Naomi King, Jackie Earle Haley, Penelope Ann Miller, Colman Domingo and Gabrielle Union. It received mostly positive reviews from critics (although not as positive as initial Oscar buzz had predicted) and it was a slight disappointment at the Box Office (possibly due to 1999 rape charges surrounding the director). I don't know if Parker is guilty of those accusations (or not), but I do know this is a great film!

Nat Turner (Parker) was a slave, in the antebellum South, who was taught to read, at a very young age, so he could study the bible. As an adult, Turner's master, Samuel Turner (Hammer), takes Nat on a preaching tour, to profit from it; while Nat's sermons are used to subdue disobedient slaves. During this time, Nat sees all the horrific atrocities of slavery; and he later leads a slave rebellion because of it. The film's title comes from a 1915 KKK propaganda movie, and it's used in a very 'purposeful' and 'ironic' way (Parker says).

I think the film is every bit as good as the Oscar winning critical darling '12 YEARS A SLAVE', if not better. I also found the rebellion scenes to be quite rewarding, in a very emotional and entertaining way (quite similar to Tarantino's 'DJANGO UNCHAINED'). The movie is very aptly directed, and written, by Parker; and the performances are all exceptional as well (especially Parker). Like I said, I don't know if Parker is guilty of the things he's been charged with (or not); but regardless of that, I can judge this film on its own merits, and it is a masterpiece. One of the very best of this year!
at 7:26 PM
Labels: Fox Searchlight, Nate Parker, Reviews, The Birth of a Nation