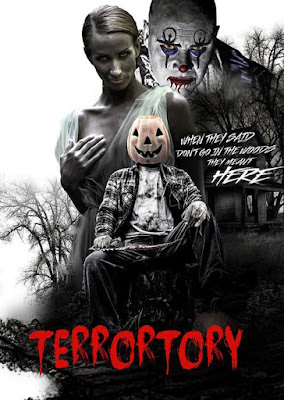 'TERRORTORY': Three Stars (Out of Five)

An ultra-low-budget anthology horror movie, telling six different supernatural tales. It was written and directed by three indie filmmakers; Dan Doran, Kevin Kangas and Mark Wenger. It stars a cast of completely unknown actors. The film is pretty cheesy, and amateurish, but there are a few quality elements to it; especially considering how low-budget it is.

The movie centers around a couple that's trying to entertain each other, while waiting for the electricity to come back on during a power outage. The guy (Brad Masters) tries to impress his female friend (Laura Kiser), by telling her five very bizarre scary stories. Each supernatural tale revolves around different people being stalked, and killed, in the woods. The segments are titled 'Gotz', 'Siren', 'The Prowler', 'Smiling Jack', 'The Drone Collector' and 'The Midnight Clown'.

At first the film was pretty painful to watch (full of atrocious dialogue, nonsense stories, and bad acting); but as it went on, I started to notice several elements I liked to it. I think to really enjoy the movie, you have to respect low-budget filmmaking; being an ultra-low-budget filmmaker myself, this is something I can do. The movie is pretty bad, in comparison to mainstream horror flicks, but for a next to no-budget film, it's not that horrible (some of it is kind of cool).
at 8:12 PM
Labels: Kangas Kahn Films, Reviews, Terrortory