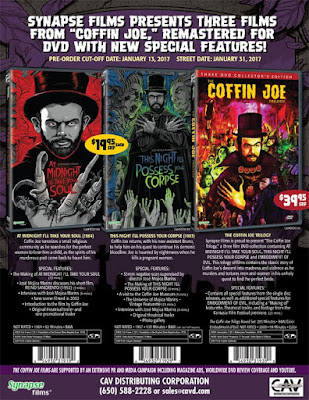 Synapse Films recently send us information for the upcoming "The Coffin Joe Trilogy" set on DVD. Films included on the set includes "At Midnight I'll Take Your Soul", "This Night I'll Possess Your Corpse" and Embodiment of Evil".

There will also be separate releases of ""At Midnight I'll Take Your Soul", "This Night I'll Possess Your Corpse" to go along with "The Coffin Joe Trilogy". All three titles will be released on January 31st.

Unholy undertaker, sinful savant, denizen of dreams and hallucinations... Coffin Joe, with his trademark top hat, black cape and long talon-like fingernails, is a horror legend across the world. Portrayed by prolific Brazilian director Jose Mojica Marins, Coffin Joe has been immortalized in films, TV programs, comic books and popular songs. Marins has a strangely personal filmmaking style that can only be compared to an unholy blend of Russ Meyer, Mario Bava and Luis Bunuel.

Synapse Films is proud to present The Coffin Joe Trilogy, a three film DVD collection containing AT MIDNIGHT I'LL TAKE YOUR SOUL, THIS NIGHT I'LL POSSESS YOUR CORPSE and EMBODIMENT OF EVIL. This trilogy of films contains the classic story of Coffin Joe's descent into madness and violence as he murders and tortures men and women in his unholy quest to find the perfect bride.
at 5:27 PM
Labels: At Midnight I'll Take Your Soul, DVD News, Embodiment of Evil, Synapse Films, The Coffin Joe Trilogy, This Night I'll Possess Your Corpse