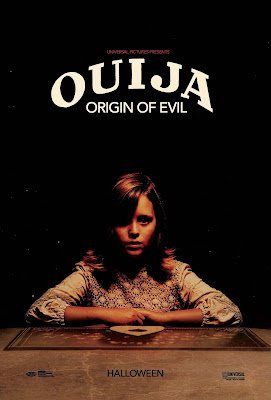 'OUIJA: ORIGIN OF EVIL': Three and a Half Stars (Out of Five)

A prequel to the 2014 hit supernatural horror flick 'OUIJA'; both films are based on the Hasbro 'talking board' game (and released by Hasbro Studios). This chapter tells the story of a widowed mother, and her two daughters, who scam people out of money by running a fake seance business (in 1967 Los Angeles). When the trio begins involving a Quija board in their 'show', one of the daughters becomes possessed and things begin to go horribly wrong. The movie was directed by Mike Flanagan, and it was written by Flanagan and Jeff Howard; the duo also performed the same duties on 2013's 'OCULUS' (another supernatural horror flick). The film stars Annalise Basso (who also costarred in 'OCULUS'), Elizabeth Reaser (of 'TWILIGHT' fame), Lulu Wilson and Henry Thomas (of 'E.T.'fame). It's received surprisingly positive reviews from critics, and fans alike (mostly), and it's also performed decently at the Box Office. While it is a better reviewed movie, than the original, it hasn't done nearly as well financially speaking. It is a much better film though.

The story is set in a 1967 suburban home, in Los Angeles; where a widow, Alice Zander (Reaser), cons grieving customers out of their money, by running a staged seance. She has help from her two daughters; Paulina (Basso), a teenager, and Doris (Wilson), who's 9-years-old. At a party with her friends, Paulina uses a Ouija board for the first time. She then convinces her mother to begin using it in their act. Real supernatural forces then begin haunting the house, and their 'show' becomes more than just a trick.