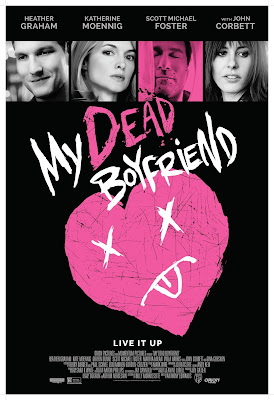 When I first heard of “My Dead Boyfriend”, I was interested in the film right away because it had Anthony Edwards directing. Yes, it’s the same Anthony Edward that co-stared in “Top Gun”, the first two “Revenge of the Nerds” films and the hit TV drama series “ER”. So when I had the chance to review his first film in the director’s chair since 1995’s little known film Charlie’s Ghost Story, I decided to take a chance on this film. It also helped that it stars Heather Graham (Austin Powers: The Spy Who Shagged Me, Boogie Nights), John Corbett (My Big Fat Greek Wedding) and Gina Gershon (Bound, Showgirls).

The film follows Mary (Heather Graham), a woman who has been struggling at life. She’s living on temp job as she tries to become a writer. Everything changes for her when she finds her boyfriend dead at her home. Now she is trying to get rid of his ashes. During her quest, she’s has strange encounter with ex-lovers, trying to bond with the dead boyfriend’s dog and mistakenly joins a rock band. She discovers the life that her boyfriend left behind as she tries to get rid of his ashes. Katherine Moennig, Griffin Dunne, Scott Michael Foster, John Corbett and Gina Gershon also costar in the film.

Once in a while, I come across a film where I couldn’t wait for it to be over. This was the case “My Dead Boyfriend”. It was one of the worst that I’ve seen this year and made me wish I never took a chance on this bad film.

Most of that, has to go with Anthony Edward’s directing. The directing felt very flat as there is no attempt to make this film be passable. Whether it’s the way that he handles the dialogue to the way that he direct his cast, everything felt very dull. It made for a long film, as I waited to become interested in something. Sadly, I was bored. The acting here was also as bad as the direction. I didn’t like any of the performances. They felt very flat and had no chemistry. When you don’t have chemistry between actors, the film suffers. There was no chemistry here as the cast and the direction looked like they didn’t care about the project and it showed in the direction and performances.

The screenplay was horrible. One of the things that I disliked about Billy Morrissette’s screenplay was the fact that the humor was very bad. He doesn’t do anything to make anything feel funny. There was a little humor in the beginning and a little at the end but a big chunk of the film felt unfunny. When that happens, you tend to lose interest quickly. The other thing that I didn’t like was the fact the characters feel one dimensional throughout. It felt like the characters were running on one note. It really made me not care about the characters as I was bored and losing interest every time a character came on screen. When this happens, it can be a long and uninteresting film like this film was.

This is easily one of the worst films of the year. With its bad directing and horrible screenplay “My Dead Boyfriend” flatlines.