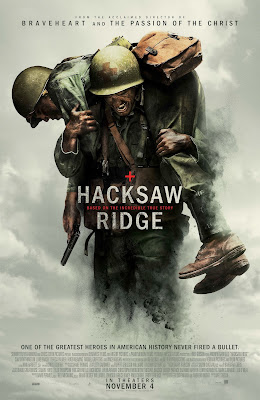 The new war biopic set during WWII, and based on the life of Desmond Doss; the first conscientious objector, and American pacifist, to be awarded the Medal of Honor. The film was directed by Mel Gibson, and it's the first movie he's directed since 2006's 'APOCALYPTO'. It was written by Robert Schenkkan and Andrew Knight. The film stars Andrew Garfield, Sam Worthington, Vince Vaughn, Luke Bracey, Teresa Palmer, Rachel Griffiths and Hugo Weaving. It's received rave reviews from critics and fans alike, and it's also been a modest hit at the Box Office (costing just $45 million to make). I think it's one of the best war films I've ever seen!

Desmond T. Doss (Garfield) was raised in Lynchburg, Virginia, by a very religious mother (Griffiths). His father (Weaving) was an alcoholic, due to his negative experiences in the Great War. After almost killing his brother, Hal (Roman Guerriero), while fighting when they were kids, Desmond becomes a very passionate believer in the Sixth Commandment. This becomes a severe problem when Desmond feels the need to serve his country, during World War II. After a great deal of harassment, and several obsessive attempts by his commanding officers (Worthington and Vaughn) to have him thrown out of the Army, Desmond goes on to save the lives of 75 fellow soldiers, as a medic during the Battle of Okinawa, and win the Medal of Honor.

The movie has been praised by many critics as being the best war film since 'SAVING PRIVATE RYAN', and I would agree; it's every bit as horrifically realistic, and violent, and it's also just as well made. I'm a big fan of Mel Gibson; as an actor and a director, but especially a director (and I've missed him over the last ten years). This film stands as one of his greatest; it's at least in the same league as 'BRAVEHEART' and 'THE PASSION OF THE CHRIST'. I'm also a fan of Andrew Garfield; he's my favorite Spider-Man, and I think he's a very talented and passionate actor. He's good in the lead, and Worthington, Vaughn and Weaving are all outstanding in supporting roles as well. What I most like about the film is it's message; it deals with a very passionate rebel outcast, who must do battle with nearly everyone else, and take on a lot of harassment, in order to stick up for his beliefs; and he does it beautifully. The movie is extremely moving, and breathtakingly beautiful; it's one of the year's very best!
at 6:20 PM
Labels: Andrew Garfield, Hacksaw Ridge, Lionsgate, Mel Gibson, Reviews, Sam Worthington, Vince Vaughn