"Within These Walls" Review by Anthony T 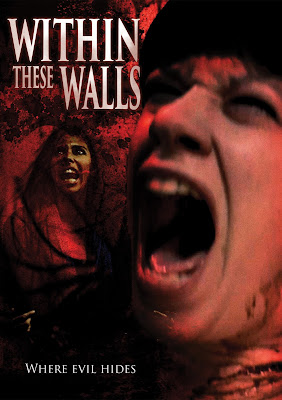 When I first heard about "Within These Wall, I was interested in this film because the plot looked interesting and the fact that I liked James Tucker’s last two horror films, “Skinned Alive” and “Pink Eye”. Those film focused more on the blood and gore but this was completely different from those films.

The film is about woman (Kelsey Zukowski), who moves back to her childhood home after the death of her mother (Laura Godown-Mortensen). She’s hoping to find out answers to why her mother killed herself. Soon, she becomes haunted and held captive by a malevolent spirit who has invaded her life. The only way to escape the horror that awaits her is to find out why the truth about what happened to her mother and get rid of the spirit that exists in the house.

Going into this film, I was expecting “Within These Walls” would be a straight up horror film with the necessary psychological and supernatural elements that encompasses all supernatural films. But to my surprise, this film has very serious tone with chilling elements that make me horrified and entertained.

One of things that I liked about this was James Tucker’s direction. He does a good job making sure the film has a dark and creepy tone in the way that he approaches and directs. Whether it was the way the film looked to how he approaches the flashback and dreamlike sequences, everything had a gothic feel to it. It helped make the sequences on the page work on screen. Like his previous films to this film, he always does a great job making sure his horror films have a dark feel and look to them. The other thing that he does well is making sure the acting was very good. He does a very good job focusing on how he directs the performances especially with the lead actress. This was one of those films where the main performance is key to its success but Tucker does a great job directing his lead actress Kelsey Zukowski. He makes sure the performance fits the film’s dark tone throughout the whole film. It makes the film work, as I was interested with the material.

Speaking of Zukowski’s performance, it was one the best things in the film. She does a great job making sure her character doesn’t feel like the typical clichéd performance that you see other films of this nature. This could’ve gone down another way with another actor, but Zukowski makes sure that she brings a level of emotion to some of the film’s key scenes. This helped take the film to another level, which is needed for a film like this to work.  Zukowski does a great job making you interested in her character throughout the film is interesting and engaging as this looked like a difficult part to pull off given the nature of the role and the story, I hope this performance will help her get more roles in the future, as she was great in the film.

The screenplay written by Tucker and Zukowski does a very good job developing the main character and the film's backstory. They spend a good time focusing on past events with the main character’s mother that took place the house to how something is haunting and tormenting the film’s main character. By doing that, it helped with the progression of the story and its main character. It also helped make this film feel more of a serious horror film than other films of this nature. The other thing that makes this good was the fact the story had a creepy tone to it. The writers do a good job making sure the tone of the story was consistent throughout. Whether it’s the way the way the scenes were created to how it was executed on paper, everything had a dark gothic tone to them which made the supernatural scenes feel frightening and uneasy to watch on screen.

I highly suggest, you find this on DVD. This is one of the better independent horror films out there. With its great lead performance from Kelsey Zukowski and very good directing from James Tucker. “Within These Walls” is a terrifying and creepy film that will shock you and keep you awake all night.