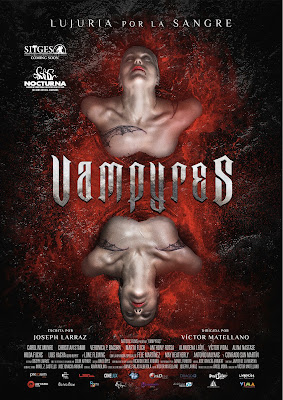 Jose Ramon Larraz’s “Vampyres” is a film that I personally consider as one of the great vampire films of all time. When I heard about this remake, it caught me by surprise. I didn’t think that this would be remade because of the content and the fact that it’s an obscure horror film.

The film is about trio of campers who camping in the woods. They discover an old house that is full of dark secrets. Soon, they find a couple of sexy vampires who is hiding a man in their basement. They have the taste of sado-masochism and blood. Now the campers must find a way out their sadistic rampage before it’s too late. The film stars Caroline Munro.

Going into this film, I was expecting the worst as remakes usually don’t work. But I have to say, I was surprised that “Vampyres” was very gothic and one of the better remakes that I’ve seen.

The screenplay written by Matellano also does a good job making sure that it’s faithful to Jose Ramon Laraza’s classic. Whether it was the way that it handles the eroticism to making sure the film has a complete dark tone, everything is done so well that it doesn’t leave you complaining about the original is better or why it was made in the first place. The other thing that makes its screenplay very good was the fact it builds up the tension. Whether it’s the relationship of the vampires to the final act, everything is built to the point that it makes you interested with the story. If that wasn’t the case, then this film wouldn’t work at all and I would be angry at this remake. Thankfully that wasn’t the case, as I like this film as much as the original.

“Vampyres” is truly one of the recent remakes that has stayed true to the original. With its very good directing and its gothic tone, “Vampyres” truly up there with “Evil Dead” as one of the best remakes ever done. Fans of the original will enjoy this one alongside with the original.