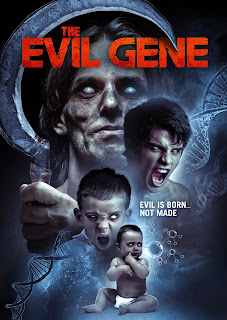 'THE EVIL GENE': Two and a Half Stars (Out of Five)

Low-budget B-horror movie; about a rare genetic defect, that's causing psychotic violent outbreaks in the inmates at a special prison. An FBI agent, with psychological problems of his own, is sent in to investigate. The film was written, co-produced and directed by (first time filmmaker) Kathryn F. Taylor. It stars Richard Speight Jr., Cameron Richardson and Lindsey Ginter. The movie is very noticeably low-budget B-movie material, and it's not a lot of fun, but it does have it's moments.

Griff Krenshaw (Speight Jr.) is an FBI agent struggling with depression and haunting memories from his past. His newest assignment is to investigate the murder of the head researcher at a special correctional facility. The inmates there are having psychotic mental breakdowns, due to a rare gene they possess, and the deceased researcher was doing special experiments on them. While Krenshaw investigates the crime, he also starts to go a little mad himself.

As I started to watch this movie, I really wasn't interested in it; it seemed really amateurish, and quite bad. As I kept watching it though, I was more entertained. The film does have some cool style to it, and a few memorable moments. The acting is mostly atrocious, but the lead isn't bad. I also think this director could be someone to watch for, when she has a little more money to work with.
at 6:04 PM
Labels: Reviews, The Evil Gene, Uncork'd Entertainment