"Phantom of the Theatre" Review by Anthony T 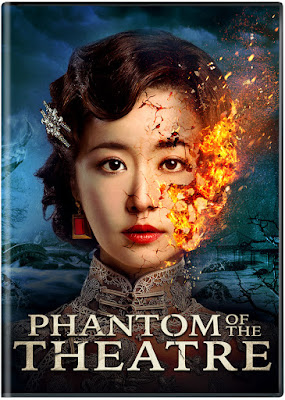 What drew me to “Phantom of the Theatre” was the fact that the synopsis looked into interesting enough to take to review it. Still, I had questions about it.

The film is about a filmmaker who sets out to make a film against his father wishes. He and a crew of people start filming in an abandon theater where is has been haunted for years by vengeance spirits. Soon, strange things are happening at the theatre as people are getting murdered mysterously. Can the filmmaker find out why people are mysteriously dying before he becomes the next victim?

Going into “Phantom of the Theatre”, I was thinking that this would be a total rip off of “Phantom of the Opera”. You had a theater as the main setting and you have a guy running in a mask. To my surprise, this didn’t feel that way as this was an entertaining horror/fantasy. Most of the reason why this film was good was the way that director Wai Man Yip makes sure the film’s look has a dark and creepy tone. Whether it’s the effects that he used to how he directs the action, this makes everything feel gloomy including making the scenes feel creepy as it helps keep you interested in the action. It made the action entertaining and helped with the some of the film’s tense moments feel intense. Man Yip also does a good job making sure he gets the performances he needs to make the film work. Some of the film’s best scenes is between the filmmaker, the actress and the filmmaker’s father. Man Yip makes sure that the main cast is into their roles while developing chemistry with each other. It provided some good acting especially towards the end.

The screenplay written by Jingling Li, Manfred Wong and Mei Yuan Yang does a very good job developing everything. From the characters to the backstory of the film, they take the time and make sure that everything is done in a way that it makes sense with what is happening. It kept my interested in the story as I was into everything in the screenplay. The other thing that the writers do well is to make the romantic parts interesting. They take the time in focusing on the relationship between the filmmaker and the actress. It helps make the dark love story between the two characters work as I was interested in that story and the relationship.

This is a very dark film that manages to keep your attention throughout. “Phantom of the Theatre” is a very dark love story with creepy images and a good screenplay that will haunt you the next time you go to the theater.