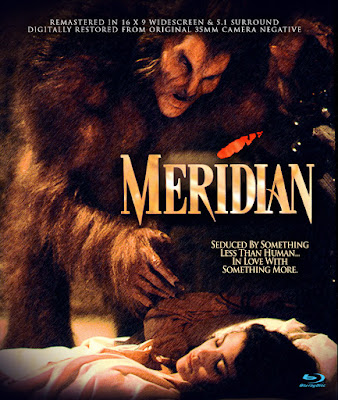 Director Charles Band's 1990 horror classic MERIDIAN is coming to Blu-Ray for the first time on October 24. Band's Full Moon Entertainment is releasing the film which stars Twin Peaks’ Sherilyn Fenn as a beautiful young artist who must choose her destiny in this hauntingly sensual tale of love, passion and revenge.

Catherine Bomarzini (SHERILYN FENN; “Twin Peaks”, “Fatal Instinct”, “Gilmore Girls”) returns to the family castle in Italy after her father’s death and gets caught in the web of a mysterious love triangle: a man (MALCOM JAMIESON) who is at times repulsive, at other times enchanting; and a creature of the night whose gentle eyes and touch reveal his infinite love and devotion.

With the help of Martha (HILARY MASON), her faithful childhood nanny, and the ghost of a slain young girl, Catherine discovers the medieval curse that threatens their lives and only she can dispel.

Alex Daniels and Phil Fondacaro are also in the cast of the cult classic which is produced by Band & Debra Dion.
at 9:34 PM
Labels: Blu-Ray News, Full Moon Features, Meridian