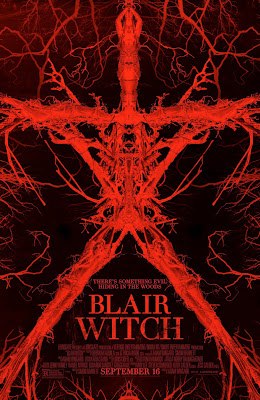 Adam Wingard and Simon Barrett's reboot/sequel to the 1999 found footage blockbuster 'THE BLAIR WITCH PROJECT'. It's the third installment in the horror film franchise, and it's a direct sequel to the original movie. Wingard directed the film, and Barrett wrote the screenplay. The duo have also teamed up (performing the same duties) on other indie genre hits; like 'V/H/S', 'V/H/S 2', 'YOU'RE NEXT' and 'THE GUEST'. Daniel Myrick and Eduardo Sanchez (the original movie's creators) served as executive producers on the film. It stars James Allen McCune, Callie Hernandez, Corbin Reid, Brandon Scott, Wes Robinson and Valorie Curry. The story centers around the sibling of the main character from the original movie. He discovers a new video of his missing sister (20 years after the events of the first film), and heads into the woods, with his friends, looking for her. The movie has received mostly poor reviews from critics, and it's bombed at the Box Office. I was severely disappointed.

James Donahue (McCune) finds video of his sister, Heather (played by Heather Donahue, in the original film), who disappeared 20 years earlier; in the woods near Burkittsville. She was investigating the legend of the Blair Witch, with her friends, when she vanished (as anyone who's seen the original movie knows). Based on this new evidence, James decides to venture into the woods to find her; with two of his friends (Reid and Scott). A film student (Hernandez) wishing to film the search, and the couple that uploaded the discovered video (Robinson and Curry), also join him on his journey.

I loved the original movie (when it came out); I thought it was brilliantly made, and scary. I'm also a huge fan of Wingard and Barrett; I've loved most of their films (especially 'THE GUEST', and the 'V/H/S' movies). So I really thought I'd enjoy this reboot, but I didn't. I was bored, almost the entire time, and there were times when I could barely stay awake. I didn't like any of the characters (or the actors playing them), and I didn't find anything they did (or what was happening to them) interesting or scary. It's all been done before, in much better ways. I hate to dis this movie, because I really wanted to like it, but it's a major letdown. With that said, it's not horrible; and my expectations were probably too high.
at 7:45 PM
Labels: Adam Wingard, Blair Witch, Lionsgate, Reviews