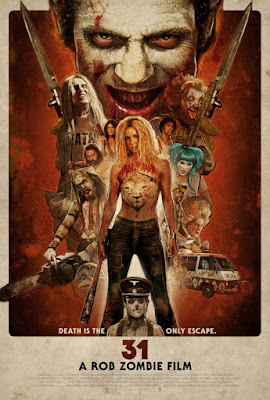 Rob Zombie has been an interesting direction. When I saw his first film “House of 1,000 Corpses”, it only latest 10 minutes as I thought the beginning was awful and it was going to stupid. It was so bad that I didn’t want to ever see a Rob Zombie film ever again. My opinion of him as a filmmaker changed when he came out with his version of the classic horror film “Halloween” back in 2007. Ever since then, I’ve have seen every one of his films including his best film “The Devil’s Rejects” and everything except 1,000 of House Corpses. This leads me to his latest film “31” which deals with a bunch of homicidal clowns and aristocrats.

The film is about five carnival workers who get kidnapped by a bunch of homicidal clowns and aristocrats. They are forced to play their game called 31 for the 12 hours. The object of the game to fight and survive against their captors. If they can, they may just walk out of there alive. The film stars Sheri Moon Zombie, Malcolm McDowell, Richard Brake, Elizabeth Daily, Meg Foster, Jeff Daniel Phillips and Lew Temple.

It seems like every Rob Zombie film is either one of those where you love it or you really hate it and wish he’d stop directing film. This film has same theory with all of the reviews for this film. But I’m going to go out on a limb and say that “31” is equal or better than “The Devil’s Rejects. One of the reasons that it very good was Zombie’s direction. He does a very good job with the way that he directs the action. The scenes were thought out very well as it had an intense 70’s throwback feel to them where it puts you on the edge of your seat. It also helped that the tone of film also added to the intense action. The other thing that makes it very good were the performances. Zombie does a very good job making sure the performances work with the film’s tone. Whether it’s the way that he directs his villains to the other characters in the film, he makes sure that they stand out in one way from other.

Speaking of standing out, I thought Richard Blake stood out from everyone in this film. I liked how he make his character Doom-Head very sinister through the way that he approaches the character from the way that he speaks to the way that he moves. It had a sinister tone that keeps you frightened. Hopefully this will get him more work in the genre, as he does a great job pulling off this character.

Zombie’s screenplay was also good. What I liked about it that he keeps the level of dread throughout very dark and intense. Whether it’s the film’s opening scene to the ending, it had that level of frightening moments that make a horror film stand out. It’s what makes this a shocking film for the entire time. The other thing that makes the screenplay good was the fact that the villains had a demented personality to them. Whether its characters like Doom-Head, Sex-Head and Sick-Head, they brought a level of the dread that makes the horror in the film feel horrifying. It adds to the film’s disturbing and bloody tone.

“31” is an intense and shocking film from start to finish. If you’re on the fence on getting Rob Zombie’s “31”, get it today as this is the most shocking and gory film that you’ll see this year.