Troma Goes to School with "Last Day of School" 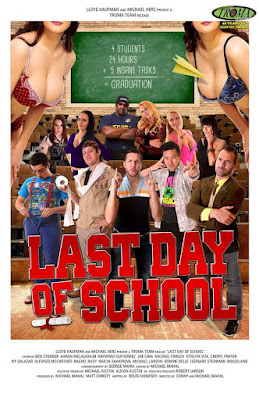 Troma Entertainment recently send us over information that they've acquired the raunchy comedy . The film is the latest film from Sonny and Michael Mahal (30 Girls, 30 Days).

For more information on this film, you can visit the film's official Facebook at https://www.facebook.com/LastDayOfSchoolMovie

Troma Entertainment has acquired Michael and Sonny Mahal's latest hilarious and brilliantly nostalgic movie, Last Day of School. From the creators of Troma's 30 Girls, 30 Days comes the next raunchy comedy masterpiece from the Las Vegas based filmmakers, it was announced today by prexy of Troma Entertainment and creator of The Toxic Avenger.

Following in the Tromatic tradition of hot and heavy humor as seen in Lloyd Kaufman and Michael Herz's 1970's Troma Classics like The First Turn On, Waitress and Stuck On You, the Mahal brothers know that awkward, inexperienced and "out-of-your-league" sex situations among co-eds are a timeless recipe to make you laugh so hard you'll squirt!! (finally!!!)