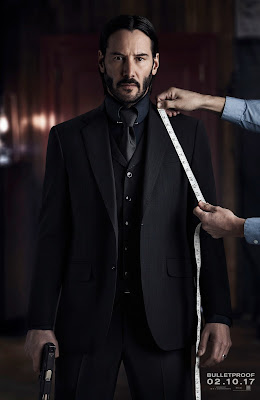 "John Wick: Chapter Two" will be apart the Liongate panel which also includes Lionsgate's other film Saban's "Power Rangers" at NY Comic Con where footage of the film will be shown along with an all-star Q&A with the cast. The panel will take place at he Theater at Madison Square Garden on Saturday, October 8 at 2:00 PM.

Lionsgate will host a power-packed panel that will feature the stars and filmmakers from the highly anticipated feature films John Wick: Chapter 2 and Saban's Power Rangers during New York Comic Con on Saturday, October 8. Fans attending the hour-long panel will be treated to Q&A sessions with the cast and producers of Saban's Power Rangers and John Wick: Chapter 2, as well as exclusive, never-before-seen footage from both films. Those who cannot attend will be able to watch the panel LIVE on Twitch.

Panel Summary:
Lionsgate presents a preview of two of 2017 most highly anticipated films, SABAN'S POWER RANGERS and JOHN WICK: CHAPTER 2 - - A must see for all, this panel will provide a look at the epic action-adventure, SABAN'S POWER RANGER'S followed by a Q&A with the cast and filmmakers bringing this new motion picture to the big screen. Attendees will also be shown footage from the return of everyone's favorite hitman in JOHN WICK: CHAPTER 2 and will be treated to a Q&A with the all-star cast.