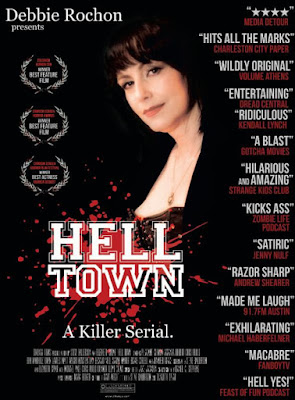 When I first heard about “Hell Town”, I was very interested in it because it stars Debbie Rochon plus the stills of the film made it look interesting. It was enough to check this film out.

The film is three lost episodes of a faux serial from the past. It follows a high school senior class that is dysfunctional as they are always clashing over cheating, sex and backstabbing. Things takes a very sinister and dark turn when it all turns to murder as the Letter Jacket Killer is picking off the students one by one. Now everyone’s a suspect as the kills get bloody and anybody can be the killer.

Going into this film, I didn’t know what to expect. I thought that this would be like a serious horror film given the slasher elements and the fact that its title sounded sinister enough to be a horror film within a serial. But I was wrong, this film has lot of dark humor and it works so well enough that I had a very good time with this film.

Directors Steven Balderson and Elizabeth Spear do a very good job making sure the film’s look had that retro serial feel to it. From the acting to the look of the film, it helps enhance the fact it feels like something that was lost for years as it helps create that feeling the film is trying to go for.

The acting here was something else. Normally, I’m a person that hates performances that are so boring or overacted to the point that its annoying but it works so well here. The acting is over the top like you wouldn’t believe but it helps make the humor work and made their characters funny. The cast does a very good job making sure that it fits the tone the film that it is going for plus there was never a dull moment. The film also has two very good lead performances from Krysten Day as the spoiled rich prom queen and Amanda Deibert as the class bitch who drinks and has to take three additional jobs to support her comatose mother. The performances help drive the entertaining humor that this film is going for.

The screenplay written by Balderson and Spear does a very good job making sure the humor works so well with the rest of the story. I liked, how they were going more of the spoofing route of the early daytime serials instead of being serious with humor sprinkled in. It made the scenes come off as funny as I was having a very good time with this. The other thing that I liked about this was the fact it didn’t feel like your standard horror film. The fact that you go into this film in the middle of the story helped gives the story its offbeat edge. It also helps that the interlude segments gelled so well with the film that you felt like you were watching lost episodes of a faux series. It’s a credit to them on how they approach the film’s tone and story as this felt like a different a kind of horror comedy that I’m not use to seeing.

This film may look like something that is too over the top or not horror enough for some viewers, but for those who like horror comedies will like this film. With its good direction and lead performances, “Hell Town” is a place that I would like to visit.