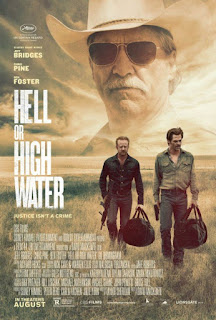 'HELL OR HIGH WATER': Five Stars (Out of Five)

Critically acclaimed crime drama flick; about two bank robbing brothers, in West Texas, trying to raise money to save their family's ranch. The film stars Jeff Bridges, Chirs Pine and Ben Foster. It was written by Taylor Sheridan (who also wrote 2015's outstanding 'SICARIO'), and it was directed by David Mackenzie. The film received almost unanimously positive reviews from critics (98% positive on Rotten Tomatoes), and it's been a small hit at the Box Office (so far) as well. I loved it.

Toby Howard (Pine) is a divorced father, living in West Texas, that desperately wants to leave a better life for his two estranged sons (John-Paul Howard and Christopher W. Garcia). His brother Tanner (Foster) is an ex-con, that wants to help Toby achieve this dream. They're family ranch is about to be foreclosed on, and there's a great deal of oil that's just been discovered on the land. The brothers decide to rob several banks, in order to pay off the farm. Marcus Hamilton (Bridges) is the retiring Texas Ranger that wants to stop them.

The movie is a very well put together western/heist flick; that focuses a lot more on rich character development, than action. With that said, the climactic shootout/chase at the end is epic. The three leads are all great in the film, but Bridges is classic (it's probably one of his best performances ever). Pine is likable, as the movie's main character; and Foster is awesome at being crazy, once again (I don't think he can play anything else). Like I said, the movie is a little slow-paced/slow building at first; but it's worth it! Sheridan's script is brilliant.
at 4:35 PM
Labels: Ben Foster, CBS Films, Chris Pine, Hell or High Water, Jeff Bridges, Reviews