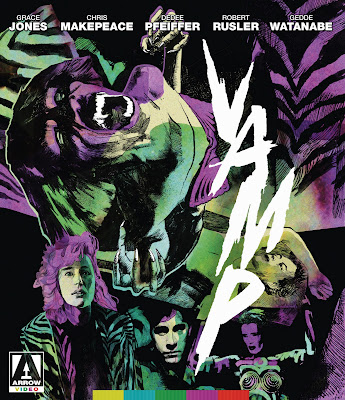 THE FIRST KISS COULD BE YOUR LAST!

Two fraternity pledges head to a seedy part of town to find some entertainment for their college friends but are faced with bloodthirsty vampires! Keith (Chris Makepeace, Meatballs) and AJ (Robert Rusler, A Nightmare on Elm Street 2: Freddy's Revenge) want to make the right impression at college and so they devise a plan to get them into the best frathouse on campus. They head to the After Dark Club where they want to find a stripper for a party their friends won't forget, instead they find themselves among vampires led by Kinky Katrina (Grace Jones, A View to a Kill)!

Almost certainly an influence on From Dusk til Dawn, Vamp is superbly designed by many of Grace Jones' own award-winning collaborators and features stunning effects by four-time Oscar winner Greg Cannom (The Lost Boys, Bram Stoker's Dracula). Delivering laughs and scares in equal measure, with the added bonus of vampy sex appeal, Vamp is a comedy horror romp with real bite!
at 4:27 PM
Labels: Arrow Video, Blu-Ray News, Vamp