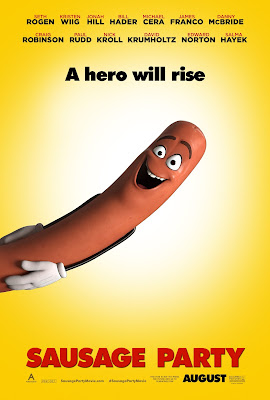 'SAUSAGE PARTY': Three and a Half Stars (Out of Five)

The first R-rated CGI animated movie! The film comes from the vulgar minds of Seth Rogen, Evan Goldberg, Kyle Hunter, Ariel Shaffir and Jonah Hill (who all co-wrote the movie); and it was directed by Greg Tiernan (a veteran director of the animated kids' TV series 'THOMAS & FRIENDS') and Conrad Vernon (who also co-directed 'SHREK 2', 'MADAGASCAR 3' and 'MONSTERS VS. ALIENS'). The film stars the voice talents of Rogen, Hill, Kristen Wiig, Michael Cera, Nick Kroll, Edward Norton, Bill Hader, Salma Hayek, Danny McBride, James Franco, Paul Rudd and many others. It tells the story of several sentient beings, that are food living in a grocery store. One sausage sets out to learn the truth, about their deadly fate. It's of course a raunchy adult-themed spoof, on popular CGI kids' movie blockbusters. The film's received mostly good reviews from critics, and it's also performed surprisingly well at the Box Office (although exit poll rankings haven't been that positive). I think it's somewhat clever and funny, but not nearly as much so as Rogen's, and company's, best.

The food, living in Shopwell's Grocery Store, all believe that when they're purchased, they'll go to a heavenly place; and live happily ever after. This is something they've been taught, all of their short little lives. Just when a sausage, named Frank (Rogen), and his girlfriend, a hot dog bun named Brenda (Wiig), are about to leave the store; a traumatized honey mustard bottle (McBride), who was previously bought and returned, commits suicide. This causes Frank and Brenda to fall out of their grocery cart. Frank then sets out to learn the full truth about their fate.

The movie is somewhat funny, but it does seem a lot like a 'one-joke comedy'; it's a clever idea, but almost all of the jokes revolve around the same gimmick (with a lot of vulgarity thrown in as well). The animation is well done; and there is some insightful criticism on religion, and how people mostly prefer to believe what they want to believe (instead of hearing the harsh negative reality). Still, Rogen says his idea for the film was based on the concept 'what if our food had feelings'! Our food does have feelings, because most of it comes from sentient animal life! He could have made an honestly insightful movie, with clever comedy as well, about how immoral (and unhealthy) the average human diet is. Some people just need to believe what they want to believe though (like obviously Seth Rogen does); and they refuse to listen to the harsh negative reality.
at 9:52 PM
Labels: Columbia Pictures, Jonah Hill, Kristen Wiig, Michael Cera, Reviews, Sausage Party, Seth Rogan