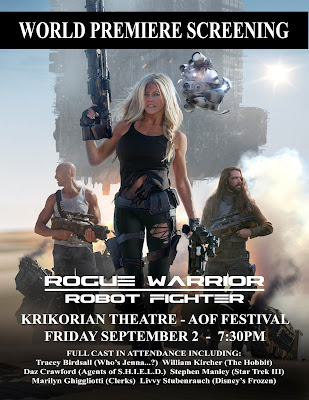 "Robot Warrior: Robot Fighter" will be making its world premiere on September 2nd at the Krikorian Monrovia Cinema 12 in Monrovia, California.

For ticket information for this screening, you can visit the film festival's official website at:  http://www.aoffest.com/#!product/prd12/4550161001/rogue-warrior-tracey-birdsall-9-2-7%3A30pm-block

For more information for the Action On Film Festival, you can goto: http://www.aoffest.com

Science-fiction gem nominated for eight majors awards at the festival!

Neil Johnson’s highly anticipated sci-fi actioner ROGUE WARRIOR: ROBOT FIGHTER has been named as the Opening Night Film at this year's Action On Film Festival, which is becoming one of the worlds top festivals to be in.

The screening also marks the World Premiere of the film, which has been nominated for eight major awards at the festival including Female Action Performer of the Year (star Tracey Birdsall) and Best Science Fiction Film.

Director Johnson will be in attendance at the red carpet event, along with the full cast led by star Tracey Birdsall (Who's Jenna...?, Dawn of the Crescent Moon).

ROGUE WARRIOR: ROBOT FIGHTER is a science fiction film set in the distant future depicting the overthrow of humanity by artificial intelligence on Earth and other worlds.