"Kubo and the Two Strings" Review by Tim Hellman 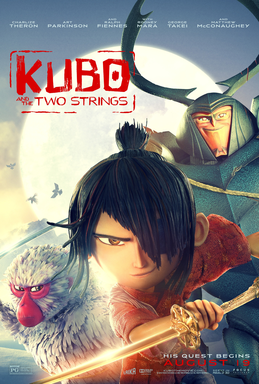 'KUBO AND THE TWO STRINGS': Three Stars (Out of Five)

The new stop-motion animated fantasy flick, from director Travis Knight (the son of Nike co-founder Phil Knight). Knight is a debut director, who was also the lead animator on 'CORALINE', 'PARANORMAN' and 'THE BOXTROLLS'. Like all of those movies, this film was produced by the Portland animated film studio Laika Entertainment, LLC. (which Travis is the CEO of, and Phil Knight owns). This movie tells the story of a young boy, named Kubo, who must find a magical suit of armor, owned by his late father, in order to defeat the vengeful spirits of his grandfather and evil aunts. It was written by Marc Haimes, Chris Butler and Shannon Tindle; Butler and Tindle also worked on 'CORALINE' (as storyboard supervisor, and character designer), and Butler also wrote and co-directed 'PARANORMAN'. The movie features the voice talents of Art Parkinson, Charlize Theron, Matthew McConaughey, Ralph Fiennes, Rooney Mara, Cary-Hiroyuki Tagawa and George Takei. It's received almost unanimously positive reviews from critics, but that didn't stop it from bombing at the Box Office. I think it's an OK kids' flick, but it's also severely overrated.

The story is set in Ancient Japan, where Kubo (Parkinson) lives with his mother (Theron); in a cave on top of a mountain. He goes into the local village, every day, to tell the residents mystical stories; using magical pieces of origami. One day Kubo stays out past sunset (which he's never supposed to do), in order to try and communicate with his deceased father; in a special ceremony. He's attacked by the spirits of his evil aunts (Mara), who can only come out at night. Kubo's mother saves him, just before she's killed, by giving the boy magical wings and sending him far away. Kubo then begins a mission to find a magical suit of armor, owned by his late father, in order to fight his evil aunts and defeat them. He finds aid from a talking monkey (also Theron), and a samurai beetle man, named Beetle (McConaughey).

I love the film's visuals (like all of Knight's films) and it's creative (and pretty imaginative) story; but the movie is also extremely slow-paced and uninvolving. I was bored almost the entire time I was watching it. The comedy isn't funny, and I just didn't care enough about the characters (or story) to stay with it (although I had to). I got really sleepy while watching this movie, as a result. The voice actors are good, and fun to hear, but it's also pretty offensive; that it's almost all white American actors, playing Asian parts. The movie is kind of a disappointment, that's for sure.
at 8:50 PM
Labels: Charlize Theron, Focus Features, Kubo and the Two Strings, Matthew McConaughey, Reviews