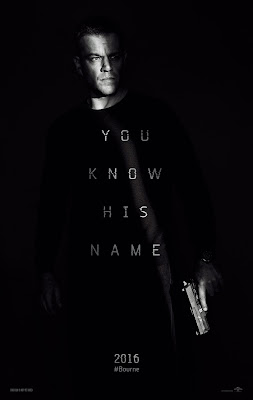 The fifth installment in the blockbuster spy thriller series, once again starring Matt Damon (as the title character). Damon returns to his most popular role; 9 years after he last played the part (in 'THE BOURNE ULTIMATUM'). Bourne is (once again) on the run from the CIA, after he comes out of hiding to help an old friend. He then searches for more clues, about his mysterious past (which seem to be never ending). Paul Greengrass returned to direct the movie (for the third time), and he also co-wrote the script (for the first time); with his longtime editor Christopher Rouse (a first-time screenwriter). The film costars Alicia Vikander, Tommy Lee Jones, Vincent Cassel and Julia Stiles (returning to her role for the forth time). The movie is entertaining enough, but it still struggles to live up to it's classic predecessors.

Jason Bourne (Damon), and his former CIA coworker Nicky Parsons (Stiles), have been in hiding for nearly a decade. Bourne has been keeping busy, and paying the bills, by competing in illegal fights (far away from society). Nicky has recently teamed up with a government 'whistle blower', named Christian Dassault (Vinzenz Kiefer). She's also drawn unwanted (deadly) attention to herself, by hacking into classified CIA data; including info on operation Treadstone (the program that she and Bourne were involved in). Bourne also comes out of hiding, to help her. He quickly learns that there's more secret information, about his past, that he doesn't know yet. The director of the CIA (Jones), and his protege (Vikander), desperately try to stop Bourne, from exposing more classified information (that they can't risk getting out).

The movie is (once again) very aptly directed, by Greengrass; his script could have used a little more work though. Damon (once again) makes an awesome action hero; even if he utters almost no dialogue in the entire movie. Vikander is strikingly beautiful (once again), and she gives a scene-stealing performance in it (as well). The movie is definitely entertaining, slightly engaging, and (without a doubt) action-packed. It does feel (somewhat) unnecessary though, and it's definitely not as good as the first three films in the franchise; it is better than 'THE BOURNE LEGACY' (at least) though.
at 8:47 PM
Labels: Alicia Vikander, Jason Bourne, Matt Damon, Reviews, Tommy Lee Jones, Universal Pictures