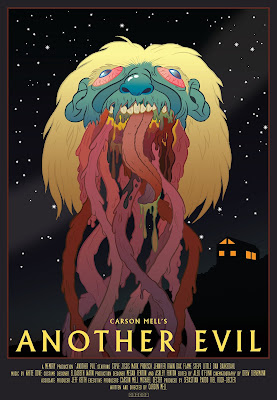 One entry in this year's 'Fantasia International Film Festival', is this extremely low-budget horror-comedy flick. It's about an artist, who's trying to rid his family's vacation home of a ghost, who then befriends the eccentric exorcist, that he hires to do it. The movie was written and directed by first time feature filmmaker Carson D. Mell, and it stars a cast of mostly unknown actors; including Steve Zissis and Mark Proksch (as the film's two leads). For such a low-budget flick, the movie is immensely entertaining!

Dan (Zissis) is an artist, who's spending some time with his family at their vacation home, when he witnesses two ghosts. The first exorcist he hires (Dan Bakkedahl), to get rid of the spirits, tells him the ghosts are friendly; and that he should just learn to live with them. Dan doesn't like that idea, so he hires another exorcist, named Oz (Proksch); that promises to actually rid the house of it's unwanted guests. A very bizarre relationship forms between the two men.

The movie is hilarious, in places, and it's also quite frightening, and disturbing, in other places. The climax is totally frightening (as well), and it's also extremely involving. The two lead performances are fantastic, the directing is adequately done, and the script is brilliant. What's most impressive about the film though, is how the filmmakers are able to do so much, with so little! The execution, of this 'little indie that could', is masterfully done! I'd definitely recommend it.
at 6:11 PM
Labels: Another Evil, Fantasia 2016, Fantasia International Film Festival, Memory Production, Reviews