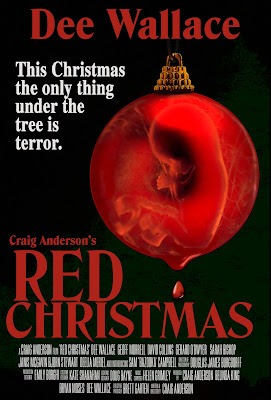 Another entry in this year's 'Fantasia International Film Festival', is this Australian slasher flick; written and directed by actor, and TV director, turned first time feature filmmaker Craig Anderson. It stars veteran scream queen Dee Wallace; as a mother, protecting her family from a deranged home intruder (on Christmas day). The movie costars Sarah Bishop, Janis McGavin, Gerard Odwyer, Sam Campbell, Geoff Morrell, David Collins, Bjorn Stewart and Deelia Meriel. The film is pretty dark, and twisted, but it's also a lot of fun; if you enjoy this type of movie.

The story is set on Christmas day; when Diane (Wallace) has gathered all of her offspring together, to celebrate the holiday. Some tense drama erupts, immediately between her daughters, but that changes when a creepy cloaked stranger (Campbell) knocks on the door. Diane invites him in, to be hospitable, but she soon realizes she doesn't want him there; when the stranger brings up past heartbreaking trauma. The family kicks the unwanted guest out, which they quickly realize was a mistake, when family members begin showing up dead (one by one).

The movie is frightening, and quite disturbing (in many different ways); it begins with an Abortion Clinic bombing, and never lets up from there. The directing is very stylistic (in a classic 80s slasher flick way), and the story is surprisingly involving. All of the characters are really well developed, and the performances are equally as impressive. Dee Wallace is especially amazing, in the lead role. I was really impressed by how much I enjoyed this movie! If you're a horror film fan, you'll probably love it.
at 8:38 PM
Labels: Fantasia 2016, Fantasia International Film Festival, Red Christmas, Reviews