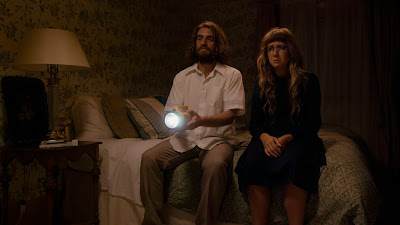 Another entry in this year's 'Fantasia International Film Festival', is this indie comedy-drama flick; written, produced and directed by first time feature filmmakers Michael Borowiec and Sam Marine. It's about an awkward conspiracy theorist, that enlists his friend, and a waitress he just met, to help him make a movie about his past encounters with aliens; while he was working for the government. The film stars George Basil, Pamela Fila, Andy Rocco and Felix Hagen. For a low-budget indie flick, that I had previously never heard of, the film is quite a treat!

Willem Koda (Basil) is a retired geologist, that lives in a small New York town. He's constantly trying to spread his stories, about alien encounters while working for the US government, to as large an audience as he can find. His friend, Todd (Rocco), helps him post YouTube videos, about his experiences. Todd also suggests that Willem make a movie, telling viewers his life story. After Willem meets Flossie (Fila), a new waitress at the local restaurant that he frequently dines at, he feels inspired to make the film. Flossie has always wanted to be an actress, and Todd is talented with video producing skills. The three decide to make the low-budget film together.

The movie is awkward, funny and emotionally involving. The three lead characters are all very lovable misfits, that are both likable and relatable. The actors portraying them all give decent performances as well (Felix Hagen is really good too, as Flossie's jerk boyfriend). The flick is definitely a slow-paced character study, and you're never really sure of where it might be going; but it's always fascinating, and oddly involving as well. The filmmakers definitely show off some talent here, with very little money.
at 8:40 PM
Labels: Fantasia 2016, Fantasia International Film Festival, Man Underground, Millennium Blonde Productions, Reviews