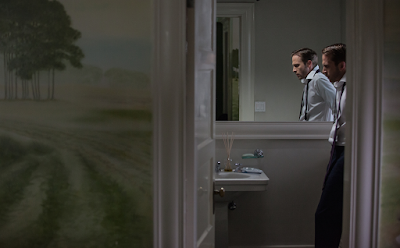 Another entry in this year's 'Fantasia International Film Festival', is this crime drama/thriller flick; from first time feature filmmaker Zachary Shedd. It's about an alcoholic film editor; that's trying to figure out the details of his movie star sister's murder, while still grieving over a tragic accident from his past. The film contains a star making performance from actor David Call. It also features a supporting cast including Kelli Garner, Jack Davenport, Peter Coyote and Frank Mosley. Shedd directed the movie, and he also wrote it's screenplay (as well). I think it's a well made film, but it's also just a little too dark and depressing.

Call plays Avery Wells; a talented film editor with a popular starlet for a sister, named Kate (Garner). Avery has been hiding out in a cabin, drinking day and night, until he's visited by his producer friend, named Calib (Davenport). Calib wants Avery to finish editing a movie, that he and Kate were working on. When Kate is suddenly murdered, shockingly one night, Avery starts to question his friends' motives, and everything else around him.

The film is decently directed, and (like I already said) Call gives a very impressive performance in it. The supporting cast is all decent as well. The story is somewhat involving, and intriguing, but I never found myself really caring about any of the characters in it. The film is really dark, and dry, and as good as Call is in it, his character just isn't very likable. I think most filmgoers will agree, that It's really hard to root for an unlikable lead character. The movie is definitely well made, but it's also one I'm not interested in ever seeing again.
at 6:15 PM
Labels: Americana, Fantasia 2016, Fantasia International Film Festival, Flies Collective, Reviews