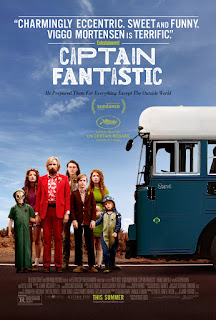 'CAPTAIN FANTASTIC': Four and a Half Stars (Out of Five)

Indie drama flick; about a family, that has lived in isolation in the Pacific Northwest forests (for a decade), that's forced to reenter society when tragedy strikes. It was written and directed by actor, turned filmmaker, Matt Ross. The film stars Viggo Mortensen; and it features small supporting turns from Frank Langella, Steve Zahn, Kathryn Hahn and Ann Dowd. It's been a small hit at the indie theaters, and it's also received mostly positive reviews from critics, and fans alike. I went into the movie knowing very little about it (having not seen a single trailer), and I really enjoyed it.

Ben and Leslie Cash (Mortensen and Trin Miller) had been living 'off the grid', in the Washington state mountains with their six children, for close to ten years. They taught their kids very strict survival skills, as well as the benefits of a socialist society. When Leslie suffers from severe bipolar disorder, and kills herself because of it, Ben decides to take his family to her funeral, in New Mexico, despite Leslie's father (Langella) strongly discouraging him against it. The family's new experiences, in the conventional world, challenges all of their staunch views on life (especially Ben's).

The movie is a great examination of extremism verses conformity; it does a very fair job of weighing the pros and cons of each. It's also an excellent character study, that's filled with involving performances; especially from Viggo, but the child actors are all good as well. It's equally funny, heart breaking and thought provoking. It's definitely a film that will leave a lasting impression on me, and I wouldn't mind revisiting it, at some point in the future. I look forward to seeing more from Matt Ross.
at 3:00 PM
Labels: Bleecker Street Productions, Captain Fantastic, Reviews, Viggo Mortensen